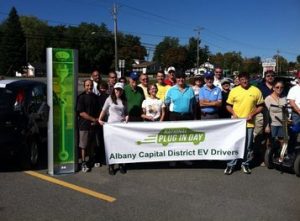 National Plug In Day, now in its third year, is getting a little bit more popular – it took place in about 95 cities, up from 65 last year. Cupertino, Calif., saw about 2,000 attendees; overall somewhere between 40,000 to 50,000 people showed up on Saturday across the US and participated in test drives, tailgate parties, brief speaker presentations by well-known advocates, and parades. It expanded outside the borders this year to Holland, Mexico, and Canada. Every single electric car that you can think of was on display, along with Brammo electric motorcycles. Long Beach, Calif., saw a well-attended event at the California State University Office of the Chancellor, where smart USA served as the lead sponsor and announced three new Level 2 EV chargers. Attendees saw 245 plug-in electric vehicles and “60 Minutes” was there to film it.

Nissan was the lead sponsor for National Plug In Day, and announced that sales of its Leaf electric car have passed the 35,000 mark in the US since being launched in December 2010. Schneider Electric was another leading sponsor, promoting its EVlink product. National Plug In Day was once again organized by Plug In America, the Electric Auto Association, and the Sierra Club. Many of the attendees at these events are EV owners who enjoy the annual car shows and chatting with their fellow colleagues about the nuts and bolts of operating their cars – similar to those attending festivals for owners of classic, vintage cars. EV owners have been thrilled to see the number of EV models coming to market and the sales figures growing at a strong percentage rate. Famous fans were present – Ed Begley, Jr., Robert F. Kenney, Jr., and climate change expert Bill McKibben, spoke at microphones along with mayors and other elected officials.

Texas study and California senate bill significant to those following fracking process
A University of Texas-Austin study released last month found that methane emissions from new wells being prepared for production, a process known as completion, captured 99% of the escaping methane—on average 97% lower than estimates released in 2011 by the US Environmental Protection Agency. It was thought to be the most comprehensive shale gas emissions study ever undertaken on methane leakage. The findings were criticized by two Cornell University scientists whose study released two years ago claimed catastrophic levels of methane were being leaked by fracking operations. Energy experts and environmentalists celebrated the finding that almost all the escaping methane could be captured by state of the art equipment.
In California Senate Bill 4 was recently passed and signed by the governor and has come under fire by environmental groups. It imposes new regulation on fracking in the state, and the bill’s author State Senator Frank Pavley (D-Agoura Hills) has said that criticism is coming from lawyers looking for the “worst case scenario.” Changes made in the final hours have been criticized by Natural Resources Defense Council and the California League of Conservation Voters. The new law requires California’s Dept. of Natural Resources to conduct an independent, peer-reviewed scientific assessment of fracking; it also requires would-be frackers to apply for a permit with the state’s Division of Oil, Gas and Geothermal Resources. There are other provisions in SB4 structured around reporting standards, and environmental groups think the amendments compromised the original bill’s constructive guidelines.

More electric vehicle rentals come to market
Rental cars are always a great way to get “butts in seats” with new types of vehicles like hybrids and EVs. Hertz is now offering Tesla Model S rentals in select US markets as part of its “Dream Cars” program. For starters, it’s now at the San Francisco and Los Angeles airports. Renters can get behind the wheel of the Model S Performance that comes with an 85 kilowatt-hour lithium-ion battery pack and a 416 horsepower motor. They probably shouldn’t tell renters that it can go 0 to 60 miles per hour in 4.2 seconds. Hertz has been at its since 2010 when it started offering the Chevrolet Volt and Nissan Leaf plug-ins.
In India, Mahindra Reva Electric Vehicles is testing out EV rentals in New Dehli, Mumbai, and Bangalore. Mahindra Eva e2o electric cars will be available in these three cities. It will cost 200 rupees (about $3.20) to rent an e2o for two hours. The electric car has a driving range of around 62 miles when fully charged and has a top speed of 50 miles per hour. It will tie into about 100 free charging points being installed in these three cities.