Tesla Inc.’s profitable quarterly report was overshadowed yesterday by CEO Elon Musk’s angry comments, well represented by this one: “To say that they cannot leave their house and they will be arrested if they do, this is fascist. This is not democratic, this is not freedom. Give people back their goddamn freedom!” 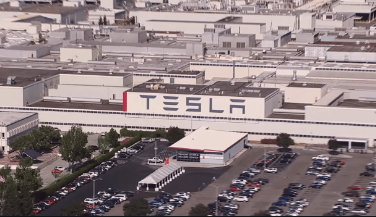 Musk would like to see the company’s Fremont, Calif., factory opened again. A government-ordered shutdown kicked in on March 24 with Covid-19 quarantine orders in effect at least until May 31. Musk told shareholders he didn’t know when Tesla could resume production in California and called the state stay-at-home order a “serious risk” to the business.

It was the third quarterly profit in a row for Tesla, Inc. Gross margins in the first quarter jumped to 25.5 percent for the company. About 7 percent of its $5.1 billion first quarter revenue came from regulatory credits — funds paid by other automakers to buy the company’s carbon emissions credits. That revenue nearly tripled from the last quarter.

Tesla’s quarterly report came just a day after Ford Motor Co. reported a $2 billion first-quarter loss, and forecasted losing another $5 billion in the current quarter as the Covid-19 pandemic takes away its new vehicle sales. Ford, like other major competitors, has seen its stock price slide down in recent weeks.

Tesla has not seen that happen. Shares were coming in at $858.16 on Thursday morning, with the profitable quarterly report helping to strengthen that price. That trend has been upward since the beginning of April. Beginning production and deliveries in China is helping the company’s perceived value.

Musk may be able to benefit generously from the financials. He may soon be making $750 million or more through his pay structure agreement made with shareholders in 2018. The Tesla chief has the option to buy 1.69 million Tesla shares at $350.02 each. Taking Monday’s Tesla closing stock price of $798.75 as an example, Musk could sell those shares for a profit of $758 million — once it reaches the $100 million at six-months average mark. It reached $145 billion this week, and around $96 billion for the latest six-month count.

Ford and Rivian:  Ford Motor Co. has canceled its Lincoln-brand all-electric SUV that was going to be made in partnership with a powertrain provided by startup Rivian. The two companies are still talking about working closely together, and putting out a Lincoln vehicle that will also be based on Rivian’s EV “skateboard” platform. Rivian recently announced that it’s pushing back the release of its first two vehicles — an all-electric pickup truck and SUV — to early 2021 because of the coronavirus pandemic. Last year, Ford made a deal with Rivian to invest $500 million in the startup company just two months after Amazon led a $700 million investment in the Michigan-based startup. As part of Ford’s investment, it announced that it would develop an electric vehicle that used Rivian’s battery pack and electric motor setup. “Given the current environment, Lincoln and Rivian have decided not to pursue the development of a fully electric vehicle based on Rivian’s skateboard platform. Our strategic commitment to Lincoln, Rivian and electrification remains unchanged and Lincoln’s future plans will include an all-electric vehicle,” a spokesperson from Lincoln told The Verge in a statement.

Natural gas stability:  As petroleum prices continue to go through upheaval in the Covid-19 economic environmental, natural gas can once gain offer fleets certainty during during a period of instability. Ryan Forrest, Western United States Region Manager at Trillium, makes the case that fleets can get hit hard depending on gasoline and diesel when the prices inevitably go back up — as seen many times during pricing instability from 2008 to 2014. Being a domestic fuel has helped natural gas retain its $2 per gasoline gallon equivalent (GGE) for several years. Fleets using renewable natural gas (RNG) in their CNG-powered vehicles are also enjoying making contributions to climate benefits and improved air quality. That point is reinforced by an April 20 announcement from Natural Gas Vehicles for America (NGVAmerica) and Coalition for Renewable Natural Gas (RNG Coalition) today that 39 percent of all on-road fuel used in natural gas vehicles in calendar year 2019 was RNG.

BYD and Hino commercial EVs:  BYD and Hino Motors signed a strategic business alliance for collaborating on commercial battery electric vehicles development. The two companies will work together to develop the best-fit commercial BEVs for customers to achieve carbon reductions. Commercial fleet customers will be served, and BYD and Hino will cooperate in retail and other related business that will promote the adoption of BEVs. Hino’s director and senior managing officer Taketo Nakane said, “We are pleased with this collaboration aiming to realize commercial BEVs that are truly beneficial to customers both practically and economically. By bringing together BYD’s achievement in BEV development and Hino’s electrification technology and reliability built over years of experience in developing hybrid vehicles, we will develop the best-fit commercial BEV products for consumer in working towards swift market introduction.”