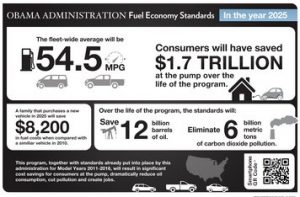 If you take a look at the auto industry benchmark for where corporate average fuel economy (CAFE) stands for new vehicle sales, the US could be very far away from even getting close to hitting the 54.5 mpg by 2025 mark in the next 10 years. The University of Michigan’s Transportation Research Institute reported that new vehicles sales averaged 25.5 mpg in May.

That’s a big step forward from the 20.1 mpg recorded in October 2007, when the Transportation Research Institute (TRI) began tracking that data. But if that same ratio for fuel economy improvements were to be continued over the next 10 years, it would mean that the actual CAFE of new vehicles sold would be closer to being somewhere in the low 30s for mpg – way off the 54.5 mpg mark. What it comes down to is how those measures are being defined.

The Consumer Federation of America is hopeful about seeing the federal targets being met. Other analysts have been skeptical about it being achieved. To get a better feel for what fuel economy and greenhouse gas emissions will look like for new vehicle sales in 2025, I did some more homework on the subject. Here’s some analysis on how the federal standards are being implemented:

What’s next? The EPA is expected to propose regulations to cut greenhouse-gas emissions from medium-to-heavy duty trucks any day now. Truck makers have been expressing much concern about these increasingly stringent rules, and may fight them in court or through private negotiations with regulators. As for light-duty passenger vehicles, automakers for the most part don’t expect the feds to soften the planned targets.

In June 2016, the EPA and California will release a technical assessment report as a midterm review, according to Christopher Grundler, director of the EPA’s Transportation and Air Quality office. The agency won’t make any conclusions on the feasibility of the final rules and will accept public comments during town hall meetings. The final decision on the outcome of the midterm review will be made by April 2018.