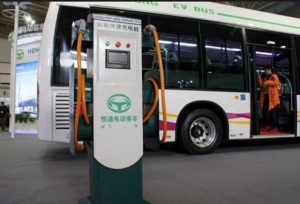 The Chinese government is taking punitive action on more than 25 vehicle manufacturers, from makers of passenger cars to buses, in a breaking scandal over subsidies granted for “new energy vehicles.” It’s one in a series of global scandals in the past year over false claims made by automakers related to regulatory compliance and subsidies for fuel economy, greenhouse gas emissions, and vehicle electrification.

Five Chinese bus makers are being penalized by the government for taking about 1 billion yuan ($150 million) in illegal subsidies, including a division of popular Chinese carmaker Chery Holding. Nissan, Hyundai, Geely, Anhui Jianghuai Automobile (JAC Motor), a subsidiary of BYD, and other carmakers in China have been accused of violating funding program rules. One busmaker will have its production license revoked while other companies will be fined. Government incentives helped Chinese sales of all-electric and plug-in hybrid passenger vehicles, trucks, and buses climb to 331,000 units last year. The China Association of Automobile Manufacturers revised its estimate for this year’s new energy vehicle orders to 400,000 from 700,000 vehicles on Friday, after the government announcements on automakers being penalized.

On September 18, it will be one year since the Volkswagen diesel car emissions scandal blew up. On that day the U.S. Environmental Protection Agency issued a notice of violation of the Clean Air Act after finding VW intentionally programmed turbocharged direct injection (TDI) diesel engines to activate certain emissions controls only during laboratory emissions testing. Last week, a VW engineer became the first employee to be indicted and to plead guilty on criminal charges over the emissions cheating.

VW engineer James Robert Liang pleaded guilty to a single charge of conspiracy to commit fraud against the U.S. government and VW customers, and for violating the Clean Air Act. The plea agreement also includes Liang being willing to cooperate with the U.S. government’s investigation into the diesel emissions fraud investigation.

The conspiracy charge does indicate that other VW employees will face criminal charges by the U.S. government. This will take place during a vehicle recall process with government agencies in the U.S., Germany, South Korea, with other governments likely to follow a similar path.

Other automakers face intense government scrutiny in regulatory compliance. Fiat Chrysler Automobiles is under investigation in Germany for false reporting on diesel emissions. Mitsubishi had its corporate offices raided by law enforcement in Japan last month over its mileage reporting scandal; that follows similar reporting scandals that enmeshed Hyundai, Kia, and Ford in 2013-2014.

Here are a few questions I’d like to have answered by automakers over these scandals: