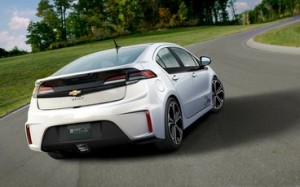 One thought on “Is General Motors holding back with the Chevrolet Volt?”