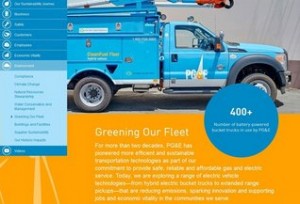 For fleets of all types – from light-duty passenger vehicles to heavy-duty commercial vehicles – the challenge these days is making the business case for new vehicle acquisitions and refueling infrastructure that hits targets balanced with cost containment. Vehicle safety, fuel expense, route efficiency, maintenance and durability, and air quality and greenhouse gas emissions might be on the list – under the reality of limited budget constraints. Meeting sustainability targets is going higher up on the list for government and business fleets. Resources now being offered by carbonBLU, Fleet Vision, and NAFA Fleet Management Association will streamline the process and bring value to fleets needing to make that business case.

Rick Sikes, former Fleet Superintendent at City of Santa Monica, has taken the position of Chief Operations Officer (COO) for carbonBLU, which provides fleets with analytics, optimization, and deployment services for reducing spending and pollution. Sikes brings over 35 years of fleet management experience with a wide variety of equipment and alternative fuel vehicles; along with fleet positions at Frito-Lay and UPS, Sikes spent the previous 10 years at City of Santa Monica, which included help organizing the annual AltCar Expo in Santa Monica since 2006. Sikes also played a role in the testing phase of the new NAFA Sustainable Fleet Accreditation Program. Sikes and the carbonBLU team will be promoting that program to fleets as a tool to become more sustainable.

Sikes replaces Sedale Turbovsky, who will continue in his role driving innovation at carbonBLU, but will also be serving as Director of the Center for Alternative Fuels. carbonBLU recently received grant funding from the California Energy Commission (CEC) to create two physical and one virtual Centers for Alternative Fuels. These centers are a free resource dedicated to implementing economically and environmentally sustainable transportation energy strategies. The virtual center for alternative fuels allows fleet managers access to some of carbonBLU’s proprietary analytics tools and a wealth of information to help accelerate commercial deployment of alternative fuels.

Last week, Vision Fleet released a report, prepared for the Colorado Energy Office, on the economic suitability of alternative fuel vehicles (AFVs), efficiency improvement technologies, and alternative fleet management approaches for Colorado’s state fleet. The study holds relevance for other public fleets considering large-scale adoption of AFVs. Vision Fleet has become well known with fleets for its role with the City of Indianapolis in the largest to-date deployment of electric vehicles in a public fleet with 425 plug-in hybrid and battery electric vehicles.

The Vision Fleet report gained input from more than 30 agency fleet coordinators and sustainability contacts to identify appropriate options based on agency-specific vehicle use cases. The study utilized a total-cost-of-ownership (TCO) approach to assess where fuel and maintenance savings would likely offset the higher purchase price of AFVs.

The report recommends several procedural measures for making the case for AFVs and fuel-saving technologies, including committing to targeted, large-scale AFV deployments; replacing appropriate vehicles in the fleet;  effectively bringing drivers into the process; leveraging third-parties to make the business case with management; and identifying cost-effective opportunities for deploying AFVs, telematics, and idle-reduction technologies. “Electric and other alternative fuel vehicles already make economic sense for most public fleets,” said Michael Brylawski, Vision Fleet’s CEO. “The challenge is identifying the right vehicles to replace and then committing the necessary resources and effort – especially in the areas of education, tracking, and reporting – to ensure the program is successful.”

In this video interview with Fleet Management Weekly, Bill Van Amberg, Senior Vice President at CALSTART, talks about the recently announced NAFA Sustainable Fleet Accreditation Program. Van Abmerg says that in the program, NAFA Fleet Management Association and CALSTART look at a fleet’s portfolio to analyze the types of vehicles and fuels that are being used to set a baseline. Fleets are guided over a period of time on using different fuels, phasing in more fuel-efficient vehicles, changing how the fleet is operated, training drivers, and implementing idle reduction. The fleet will later be measured again and given a report card assisting fleets in making environmental improvements while at the same time showing a bottom-line value to their organizations.

The NAFA Sustainable Fleet Accreditation Program is now being structured on a four-tier rating system that evaluates fleets based on their environmental performance against world-leading goals. During the NAFA I&E conference in Orlando, NAFA Fleet Management Association, in conjunction with CALSTART, announced how the program has been designed to become an industry standard for recognizing concrete improvements in reducing emissions, increasing fuel efficiency, and reducing fuel use.