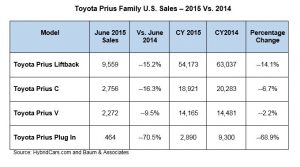 The Toyota Prius has been a flagship for Toyota Motor Co. for about 15 years – and the automaker is counting on the redesigned 2016 model to restore its image as the leading green car on the market. Spy shots show that its body style is changing and will be more in-line with the revamped 2016 Chevrolet Volt; and the mileage will be getting better – sources say the standard Prius hatchback (sometimes called the “Liftback”) will go from a 50 mpg rating to 54 mpg on the window sticker. Toyota faces steep challenges in getting Prius sales back toward upward trending with gasoline prices being where they are; and stiff competition coming from small, fuel-efficient cars and competing alternative technologies.

If you study the chart above with the entire Prius model lineup, you’ll see sales dropping for all the variations – with the big one being the Prius Plug-in Hybrid dropping about 70% from a year ago and the mothership model down about 15%. Nationwide, Prius sales fell 12% last year to 207,372 units sold. The Prius had been the No. 1 new vehicle model sold in California during 2012 and 2013, but that model was beaten last year by the Honda Accord.

Toyota seems to have lost its commitment to assembling and delivering its Prius Plug-in Hybrid to its dealer network. Pricing is higher than the Prius and Prius C, even with the $2,500 federal tax credit and state incentives on the plug-in version, which makes it more challenging to sell; but a few years ago, the Prius Plug-in Hybrid was doing very well in new vehicle sales, sometimes selling more than the Chevrolet Volt. Less than 500 units (464) were sold in June; for comparison, in March 2015, 473 units were sold and in June 2014, 1,571 units were sold in the U.S. Toyota decided to cease production of the Plug-In Hybrid in June; the company said it was working hard at developing the next generation of the Prius Plug-in Hybrid and will be sharing details on the launch date. The recent decision to extend the launch of the Prius Liftback, C, and V, could push off the next generation Plug-in Hybrid as far as the second half of 2016 as a 2017 model.

It’s very typical to see fleet applications of the standard Prius model these days in taxis and in company cars. Toyota hasn’t released data on its fleet sales, but it does offer fleet incentives – for 2016 models, there will be a $500 incentive for the hybrid lineup (Prius, Prius C, and Prius V) versus a $1,000 incentive for the popular Toyota Camry sedan. The Prius Liftback comes in five levels with Two through Five being priced at a bit over $25,000 to just over $30,100. The level One is priced $1,000 less than the Two trim level and is reserved for fleet customers.

For Toyota Motor Sales, Toyota’s US division, seeing a lot of Prius taxis being used in markets like New York and Los Angeles isn’t very appealing. “I hate to see Toyotas in taxi fleets but (it) does create an image for us,” said CEO Jim Lentz in 2013. Taxi operators and drivers like the fuel efficiency and ample passenger room in the backseat and trunk area. The Prius is a very good car to drive on crowded city streets, being small and nimble with enough torque to cut through traffic openings.

A Toyota dealer in Texas thinks the Prius makes a lot of sense for Uber drivers to save money on their passenger trips. Toyota of Plano is offering hefty discounts and targeted online advertising to Uber drivers – and now is selling about 200 cars per year to these drivers, or 6% if its 3,200 cars sold per year.

The dealership likes it very much as a rolling advertisement for the Prius – as drivers pick up passengers and tell them how much they love their Prius. The dealership doesn’t mind offering great rebate incentives to Uber drivers. “If I lose $1,000 to sell a car and [an Uber driver] sends me three customers,” general manager Rusty Gentry said, “I still come out ahead.”

The future of hybrids has been called into question with moderate gas prices and fuel efficient cars and crossovers becoming more popular. Nissan has killed the hybrid version of its Pathfinder crossover as consumers look increasingly to other Nissan products. Hybrid sales numbers have been declining as a share of nationwide new vehicle sales, especially after gasoline prices started dropping in the summer of 2014. Toyota continues to try out a broad spectrum of technologies and vehicle categories to secure its spot as the No. 1 automaker in global sales – and as an innovator embracing new technologies. Lately, the Toyota Mirai fuel cell vehicle has become Toyota’s favorite alternative technology vehicle to show off.