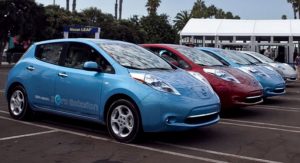 If you look at U.S. green car sales numbers, you’ll notice that the Nissan Leaf is down considerably – while others, including arch-competitor Chevrolet Volt – are up noticeably lately. The Leaf isn’t the only plug-in seeing declines in U.S sales. The BMW i3 has dropped way down this year, and Ford has announced that the Ford C-Max hybrid and plug-in hybrid will be vanishing in 2018.

What’s behind it? Here are a few points to consider on the state of plug-in sales in the U.S……….