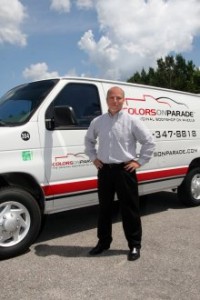 For dealerships, fleets, and body shops following environmental sustainability strategies, reconditioning vehicles with waterborne paints has become a resource offering cost and time efficiency and compliance with new industry standards. Years ago, the US Environmental Protection Agency adopted a volatile organic compound (VOC) standard, encouraging industries such as automotive to switch over from solvents to a cleaner element, with waterborne paint making the most sense to paint suppliers. Air quality management districts within California adopted stricter standards years later, and similar rules have been adopted recently in Maryland and appear likely to come soon to Virginia.

Jeff Cox, president of Myrtle Beach, S.C.-based Colors on Parade, says that regulatory compliance gets companies to save money using waterborne auto paints and to make the process more efficient than it had been in the past. Colors on Parade serves fleets, car rental companies, dealers, and body shops, by showing up in cargo vans onsite ready to recondition vehicles. The company’s trained and certified technicians repair everything from dents and dings to scratches and interior repairs using proprietary and patented systems, as well as original manufacturer products.

Some of the company’s dealer clients are using clean, waterborne paints as a selling point for marketing to car shoppers interested in green sustainability issues. It’s also become a cost effective strategy for dealer management. Fleets like that it reduces service work downtime and contains costs. “Waterborne is great compared to solvents, and we’re using less paint than body shops,” Cox said. While repairing and reconditioning a vehicle, an auto body shop might be spraying a lot more paint than is needed. Colors on Parade finds that clients are appreciating the environmentally responsible practice along with the cost and time savings.

Colors on Parade recently celebrated its 25 year anniversary; the franchise network is located in 25 states and 52 metro markets and is continuing to grow. The company works closely with its paint supplier, PPG, on following regulatory and industry standards being adopted. Colors on Parade has been active in discussions with PPG and government regulatory agencies to stay informed on adoption of waterborne paints. An informal alliance between 13 states in the Northeast section of the US is getting these states to move toward adopting reduced VOC requirements, with waterborne being the most commonly considered paint solution, Cox said. The state of Virginia looks like it will be adopting a clean paint standard soon.

“When Maryland passed their waterborne paint law, it was obvious to me that Virginia would do the same soon,” said Glenn Buck, owner of a Colors on Parade franchise in Manassas, Va. “There are a lot of good reviews of the product, and so by switching early we can ease ourselves into it, really get to know waterborne paint and how it works. Sooner rather than later we’ll all have to switch over, and by then we’ll be experts.”

One thought on “Colors on Parade brings green, cost effective auto paint to dealers and fleets”