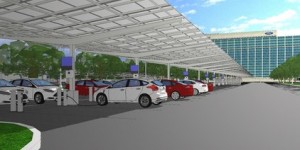 Carport-mounted photovoltaic solar power panels are taking off in the US, offering a win-win for the solar and electric vehicle communities. It could also help alleviate some of the trade war battle with China as its companies dump low-priced equipment in the US market. US solar carports are taking off – GTM Research reports that it’s a burgeoning market in the non-residential solar market and the US solar industry as a whole. It increased 157 megawatts of energy in 2013; 2014 is expected to be the fourth consecutive year in which greater than 100 MW of solar carport installations will take place.

Detroit-based utility DTE Energy is betting it’s a worthy investment and is working with Ford Motor Co. to build what it calls, “Michigan’s largest solar array.” The project is funded by DTE Energy and will provide 360 covered parking spaces for 30 charging stations at Ford’s headquarters in Dearborn, Mich. The carport is expected to generate 1.038 MW of electricity – enough energy to power 158 average-sized homes. The solar array is expected to offset 794 metric tons of carbon dioxide emissions annually and will be well positioned to charge Ford EVs such as the Fusion Energi and C-Max Energi.

A number of automakers have been turning to solar, including General Motors, which has set up a large solar array at its Detroit-Hamtramck Assembly Plant, where it assembles the Chevrolet Volt.  And solar energy is providing a major chunk of the power needed to run Volkswagen’s big assembly plant in Tennessee.

Volkswagen last year solar-powered its 33-acre Chattanooga Solar Park outside its Tennessee assembly facility, which it dubbed “the world’s greenest auto plant.” Honda is using solar power to produce hydrogen for use in its FCX fuel-cell vehicles, and for the new fuel cell car it will begin marketing in Southern California next year. Last year, Honda agreed to invest $65 million into Solar City with the goals of offering customers in 14 states low-cost home solar charging stations for their EVs such as the Honda Fit EV or the Honda Accord Plug-In.