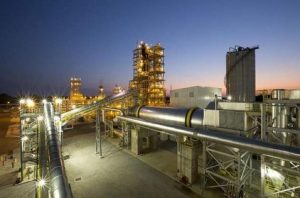 KiOR Inc., which operates a commercial-scale cellulosic biofuel plant, may be closing its shutters very soon. Backed by venture capitalist Vinod Khosla, there’s been a lot of hope in KiOR as a symbol for possibility in advanced biofuels as a clean transportation fuel. Its catalytic process converts woody biomass and non-food crops into gasoline and diesel and can be fueled through the existing US infrastructure. Khosla just made a commitment for near-term financing, but the company needs more additional capital by April 1 to stay in operation. The company needs to meet certain milestones to bring in at least $25 million by the end of this month; part of that milestone performance is bringing its Columbus, Miss., biofuel plant through an upgrade. If additional funding doesn’t come through, it’s likely to default on its debts and may file for bankruptcy. All of this was announced not long after the company reported a $347 million loss for 2013.

In October, this advanced biofuels producer received $100 million from Khosla Ventures LLC and Gates Ventures LLC to expand production at the Columbus plant. As I wrote about back at that time, it looked very promising for KiOR, being the first US company to build its own commercial scale cellulosic biofuel plant – creating jobs, economic growth, and clean transportation fuel. If KiOR goes belly up, it will provide more ammunition for biofuels critics (and there are quite a few out there). The biofuels industry has only produced a small fraction of the level envisioned in 2007 by the renewable fuel standard. Even with the US Environmental Protection Agency’s cutbacks on ethanol blend and advanced biofuels proposed in November, that’s not the real problem. It’s a startup industry that needs more success stories, so this one would hurt. For several months, I had KiOR on the green transportation stock market index that I show monthly in Green Auto Market Extended Edition. The company’s stock has not been performing well lately. The company may need to be removed from the chart.

How the troubles at KiOR will affect the advanced biofuels industry is still unknown. There are a few biofuels companies that are performing very well financially, and are giving hope to investors. One of them, Aemetis, another publicly traded company, also produces advanced biofuels for the US market – and deployed commercial-scale production in the past two years. Aemetis recently announced record quarterly and annual gross profit. It’s used a different business model than KiOR, and there are several other highly profitable domestic biofuels producers, according to Biofuels Digest’s Jim Lane.