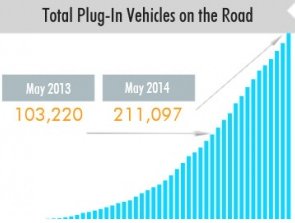 Automakers experienced their highest monthly US sales figure ever in May for battery electric and plug-in hybrid electric vehicles, and their second highest month for hybrid vehicle sales. Overall plug-in sales reached 12,453 – with 5,802 of them battery electric vehicles and 6,651 plug-in hybrids. For hybrids, 52,227 units were sold in the US during May, its second highest sales month on record. Plug-in vehicles hit the 211,097 sales mark in the US by the end of May; that’s more than double the total recorded one year ago. Nissan had a particularly good month for Leaf sales, hitting 3,117 units for the month – it’s best month ever and the first time Leaf sales passed the 3,000 mark. It also brought the Leaf past the 50,000 mark for its US sales – 52,511 sold, to be precise. The Leaf is still behind the Chevrolet Volt for overall sales and highest monthly sales number. The Volt continues to be sold at a lower level this year, coming in at 1,684 sold in May – only marginally up from the 1,607 sold one year ago. Sales were thin for other EV models including the Cadillac ELR at 52 units sold in May, the Honda Fit EV at 33, and the plug-in hybrid Accord selling 46 units in May. Toyota saw a much better month for its Prius Plug-in, which sold 2,692 units in May.

Hey there, opinionated people:  I would bet that several of you readers have interesting perspectives on clean transportation – cool new technologies, geopolitics, economics, environmental issues, how something could succeed, why another is bound to fail……..  Your opinions are requested – and you’ll find the “Leave a reply” link at the top of every post in Green Auto Market. I have met some interesting people through reader comments, along with what I regularly post on LinkedIn and Twitter. So please keep it coming!

2 thoughts on “Big Picture: Great month for EV and hybrid sales, Your opinionated comments are requested”