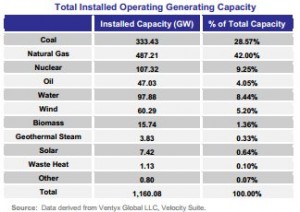 Electrified transportation has major challenges to overcome with one of them being where the electricity comes from. Your car could be zero emission, but if the energy source used to generate the electricity powering your motor is spewing carbon, then what’s the point? Or so the thinking goes. One bright spot is that new power plant capacity is seeing big growth in renewable energy and natural gas, and steep decline in coal-fired plants. A new report from the Federal Energy Regulatory Commission’s Office of Energy Projects says that renewables (such as solar, wind, biomass, geothermal, and hydropower) made up 37.16% of new domestic electrical generating capacity during 2013 for a total of 5,279 milliwatts (MW). Natural gas led 2013 with 7,270 MW of new capacity (51.17%). Renewable energy made up for three times that of coal (1,543 MW or 10.6%); oil (38 MW – 0.27%); and nuclear power (0 MW – 0.00%) combined.

Electricity production accounts for about 33% of greenhouse gas emissions in the US, according to US Environmental Protection Agency. Natural gas is a fossil fuel, just like coal, but it’s a much cleaner source of power – the EPA says its produces less nitrogen oxides and carbon dioxide than coal, and half as much carbon dioxide, less than a third as much nitrogen oxides, and only one percent as much sulfur oxides at the power plant. As you can see in the Federal Energy Regulatory Commission chart above, coal still makes up for a large share of US power plant operations at 28.57% last year. It used to be right above 50%; natural gas has been taking some of that share away for the past two years. Water and wind make up the biggest part of the renewable category; solar gets a lot of attention but is still in an early stage of development – but if you look at the new roll outs last year, solar is looking better. Solar led the way with 266 new units totaling 2,936 MW, followed by wind with 18 units producing 1,129 MW. Biomass provided 97 new units totaling 777 MW; water had 19 new units and 378 MW; and geothermal steam had four new units and 59 MW.

And in other clean transportation news: