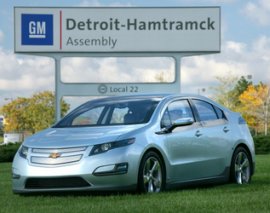 General Motors would like to pick up steam on sales of its plug-in hybrid Chevrolet Volt. To get there, GM will be selling two versions of the redesigned 2016 Volt. One will be a lower-priced version with a smaller battery pack and shorter driving range. That will be carried overseas through GM’s Opel division in Europe. The next versions of the Volt will go into production in about 16 months at the automaker’s Detroit-Hamtramck plant. That plant will get a $384 million investment that will be aimed toward the Volt and a new flagship Cadillac sedan and a redesigned Buick LaCrosse.

GM would like to reduce product cost and make the Volt more profitable, and expects to achieve necessary cost reductions in the 2016 model. The automaker would also like to see stronger sales results without investing so much on incentives. The Chevrolet brand reported selling just 58,158 units since the Volt was launched nearly 40 months ago.