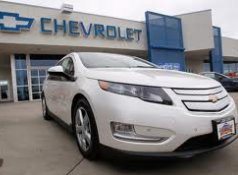 August witnessed a hot sales market for plug-ins and hybrids
Plug-in electric vehicle sales nearly doubled year-ago figures to 9,431 units in August. The Chevrolet Volt reached its highest ever monthly sales figure – 3,351 units sold in August reaching just under 15,000 for this year. June 2013 had seen its best June ever at 2,698 units sold and July had dropped to 1,788. So August was a win-win for GM and incentives have been helping. The Nissan Leaf sold 2,420 units in August and made it to a little over 14,100 for the year. Previously, March had been the best sales month of the year for the Leaf, at 2,236 units sold. Atlanta has been a new and strong market for the Leaf. Tesla brought in sales of 1,716 Model S units, for a total of 13,330 for this year. Toyota had an even better month, setting a monthly record of 1,791 of its Prius Plug-in Hybrids. The RAV4 EV did well, too, reaching a record 231 units sold. Overall, the Prius saw a strong month with 27,358 units sold in all four variants – 28% over last year.

Ford did very well, almost quadrupling its green car numbers from last year at 8,292 vehicles sold. The Fusion Hybrid reached 3,694 units sold, C-Max Hybrid reached 2,411, the Fusion Energi hit 600 sold, and C-Max Energi made it to 621 sold. Revising the mileage rating on the C-Max hybrid on August 15 didn’t seem to hurt sales. Ford announced the EPA combined fuel economy rating was dropping from 47 to 43 mpg. The automaker thinks it still has a very strong selling point against its chief competitor, the Toyota Prius V, which has a combined mileage rating of 42 mpg.

DOE investing $45M in advanced vehicle technology projects
Ford, General Motors, Chrysler, General Electric and Caterpillar are among the 38 companies, universities and national labs to receive more than $45 million in US Department of Energy funding for projects that accelerate R&D of vehicle technologies to improve fuel efficiency, lower transportation costs, and protect the environment. While similar to the Advanced Vehicle Technology Manufacturing program, this new DOE project fund is a separate project tied into President Obama’s Climate Action Plan that was launched in June of this year. The US Army will be contributing an additional $3 million to support projects based on lightweighting and propulsion materials, batteries, fuels, lubricants.

Coalition bringing electric drive experience to tourists visiting Orlando
Drive Electric Orlando (DEO) is bringing the electric vehicle driving experience to a lot of tourists visiting the city famous for its massive theme parks. DEO is bringing together car rental, charging stations, hotels, theme parks, and other stakeholders into the coalition. Enterprise Rent-A-Car is playing the leading role and working with Nissan on bringing Leafs to customers. Other participants include Disney, Sea World, Universal Studios, Duke Energy, Visit Florida, Peabody Hotel, and the University of Central Florida; Electrification Coalition is also part of the network. Renters can get a Leaf for as low as $30 a day that includes GPS navigation and overnight charging at hotels. Customers will be able to have free use of the Clear security lanes when leaving the city’s airport.

Siemens leaving EV charging business
Siemens AG, a German multinational engineering and electronics conglomerate, is leaving the electric vehicle charging market. Demand and market development has been weaker than expected in Germany and in the US. It will continue offering wall boxes for recharging electric vehicles at home, and will continue research on wireless charging. Siemens has played a very visible role at conferences such as Plug-in 2012.

Tesla-Mania!:  Combat with dealers, Musk family road trip
After mixed results in state-level battles with dealers over its non-franchised dealer business model, Tesla Motors is ruminating over taking it to Washington. Tesla had fought the fight most intensely in Texas to overturn state franchise laws – and lost to dealers. Texas is considered to have the toughest state laws benefiting dealers over automakers. Dealers are watching it very closely with fear that Tesla gaining victory in Washington or any of the states would open the door to automakers from developing countries coming to the US to carve out market share. There’s also fear of what major OEMs might gain if Tesla gets away with it and they decide to switch over to company stores. They do tend to find Tesla CEO Elon Musk extremely irritating, but recognize he can pull a lot of sway.

In less dramatic news, Musk will be taking off on a cross-country road trip in a Model S with his five kids in the car. Musk will have to figure out the best way to drive 3,200 miles and make charging time most efficient at Tesla’s Supercharger stations. He thinks it will take up to 90 minutes a day to get the needed charging done during the five-day trip.