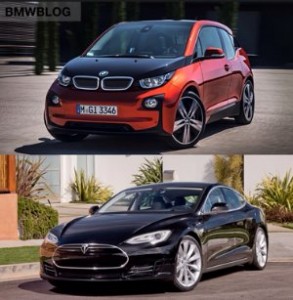 Tesla Motors took more steps in sharing technologies, one of them taking place through meetings with its top competitor in the luxury electric vehicle space. Executives from Tesla and BMW met last week and discussed working together on charging stations that could fuel different types of electric cars. The automakers discussed ways to raise popularity of battery electric vehicles to overcome consumer stumbling blocks related to range anxiety, having access to enough charging stations, and how long it takes to charge them. “Both companies are strongly committed to the success of electro-mobility and discussed how to further strengthen the development of electro-mobility on an international level,” a BMW spokesman said in a statement. Tesla CEO Elon Musk said there had been talks with BMW about how to promote EV adoption, and how to make better use of Tesla’s network of charging stations. (Editor’s note:  there’s also rumor that Nissan would like to join these conversations with Tesla and BMW.)

In that spirit, Musk posted a statement on the company’s blog last week that Tesla’s wall of patents has been removed: “in the spirit of the open source movement, for the advancement of electric vehicle technology. Tesla will not initiate patent lawsuits against anyone who, in good faith, wants to use our technology.” Musk has also recently made statements about EV charger companies taking up its “Supercharger” standard for fast charging; fast chargers will need to have higher power levels and shouldn’t charge people on a per-charge basis, he said. And in other news, Tesla had a favorable comment made by the automakers’ trade group, the Alliance of Automobile Manufacturers about the state-by-state legislative battles dealers are having with Tesla over franchise laws. The legal balance is weighted too heavily toward dealers and needs to be balanced out. “At the request of local dealer groups, states set up a labyrinth of protectionist laws that make the car-buying experience difficult and costly for our customers,” said Gloria Bergquist, a spokeswoman for the Alliance of Automobile Manufacturers, which represents 12 automakers but not Tesla.

And in other clean transportation news……….