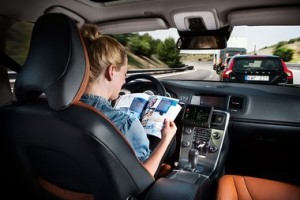 (Editor’s note:  Stay tuned for an upcoming white paper from Green Auto Market:  Hands off the Steering Wheel, The state of autonomous vehicle testing, regulations, and its next phase.)

The three panelists discussed where autonomous vehicles stand, and how these three pillars view what’s coming up on the landscape. Autonomous, driverless vehicles have been witnessing an onslaught of attention and debate in the past two months, with Google announcing that it may very well build its own driverless cars; and for the next two years will be testing its self-driving pods. A study was released this month by IEEE based on a survey of more than 200 engineers, researchers, and academicians; they believe 2030 to 2035 is a more realistic timetable for when autonomous vehicles will see the light of day. The Association for Unmanned Vehicles Systems International and the Transportation Research Board hosted the Automated Vehicles Symposium 2014 in San Francisco this month. Continental and Bosch were two of the conference sponsors; these major suppliers have been playing a prominent role in testing and developing autonomous vehicle technologies. Nissan added to the autonomous vehicle dialogue with a more detailed description of what the automaker will be rolling out in the next few years.

Mason has been part of seeing autonomous vehicles evolve from a student robotics project to becoming something very similar to what Google has been testing in recent years with its driverless Prius fleet. The 2003 Off-Road Robot Rally didn’t produce much; the Golum Group only made it five miles on the desert road test in its pickup truck; Carnegie Mellon University, which continues to play a leading role in testing these vehicles, had the best results at seven miles on that trip. Things got better in 2005, where the Golum team had a video camera onboard its Ram pickup and was able to practice obstacle avoidance, and reached the top speed in that year’s competition of 47 miles per hour. The truck eventually lost its memory and ran off the road. In 2007, the Golum team raced a much more capable vehicle – a converted Prius — which offered a look at the self-driving car of the future, Mason said.

Schulz gave voice to a perspective expressed by several automakers – autonomous vehicles are part of the overall role-changing identity taking place in the auto industry. For Schulz, autonomous vehicles represent a major shift for vehicles and automakers, but they’re not the only thing. His presentation discussed Toyota’s role in hybrid systems and alternative fuels, specifically the hydrogen fuel cell vehicle that Toyota is rolling out a year from now. Schulz talked about Toyota’s Advanced Active Safety Research Vehicle (AASRV) being test driven near the Toyota Research Institute in Ann Arbor, Mich. Toyota has been participating in a huge research vehicle-to-vehicle (V2V) study with other automakers involving about 9,000 vehicles and organized by the University of Michigan at Ann Arbor. He also mentioned the Driver Awareness Research Vehicle (DARV) introduced last year at the LA Auto Show. These studies tie into Toyota’s mission of making contributions to vehicle safety, mobile applications, and advanced technologies, Schulz said.

Soriano described the challenges that California faces overall in transportation – 32 million vehicles registered in the state and 323 billion vehicle miles driven per year. The nation has been seeing about 32,000 fatalities in vehicle collisions each year; and traffic congestion and wasted fuel consumption are factors influencing interest in autonomous vehicles. The state government has been receiving input from residents on their opinions on autonomous vehicles; the top concerns have been liability and “driver” definition – how will the driver be defined for responsibility in the event of a crash and how does the DMV determine who would be assigned with violating state vehicle codes; privacy issues – who owns the data and how is it used; and cyber security, Soriano said.

Soriano has been part of legislation taking shape and being adopted by regulatory agencies in California. He sits in on a statewide steering committee for Senate Bill 1298, which is setting the structure for California’s autonomous vehicle testing and deployment rules that will be released by the end of this year. The National Highway Traffic Safety Administration (NHTSA) participates in these meetings along with state agencies: California State Transportation Agency, Department of Insurance, California Highway Patrol, Office of Traffic Safety, California Department of Transportation, and the Department of Motor Vehicles.

NHTSA is years away from releasing federal regulations, but last year it did release guidelines with five levels for defining each type of autonomous vehicle; Level 0 is no automation; Level 1 is function- specific automation (typical of what we’re using right now in vehicles, such as cruise control); Level 2 is combined function automation; this level involves automation of at least two primary control functions operating in unison, such as adaptive cruise control in combination with lane centering. Level 3 is limited self-driving automation, which says that the vehicle can operate by itself in most situations – the driver may need to take over the car when approaching a construction zone, for example. Level 4 covers full self-driving automation. In Level 4, the vehicle is designed to perform all safety-critical driving functions and monitor roadway conditions for an entire trip. Most of California’s regulations cover Level 3 and Level 4, Soriano said.

As part of California’s SB 1298, the manufacturer testing standards were approved by the legislature in May and go into effect in September. The state has committed to passing through the second part by the end of this year covering deployment of the vehicles to owners, and rules for operating the vehicles on roads.

When a company tests an autonomous vehicle, they’re usually trying out LiDAR sensors mounted on the car’s roof, radar, cameras, and GPS. Mason said that the advanced sensors that autonomous vehicles require are currently pretty expensive. It’s not yet known how much a driverless car will cost in the future; while a recent JD Power and Associates study found that consumers are willing to pay about $3,000 more for this new technology, it’s likely to cost them more.

Bernard said that one issue being followed is how autonomous vehicles can bring mobility back to people who’ve lost use of their vehicle due to factors such as disabilities. Another advantage of driverless cars, as vividly presented during an Audi commercial, is a self-parking system. You can step out of your car and it will find a space and park itself; when you’re ready to leave, you pull out your smartphone and call the car to come and pick you up. People in the audience seemed to really like that perk.

There should have been one more chair on that stage. The fourth pillar could have been represented by an executive from a technology supplier such as Google, Continental, or Bosch. Google is playing the leading role on moving driverless cars forward, but Continental, Bosch, and other technology giants and Tier 1 suppliers have been quite active in testing projects in the US and Europe.