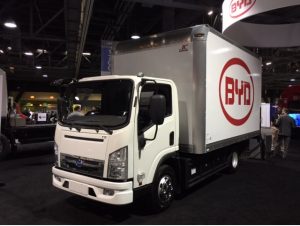 ACT Expo 2016 reflected a few changes emerging in the clean transportation space – adoption of more electrified vehicles by fleets and freight movers; results of a study detailing the benefits of using renewable natural gas; speaker panels delving into the future of urban mobility and autonomous vehicles; and a revised name for the sixth annual conference and expo.

Conversations were filled with discussions of two hot topics coinciding with the event: the California Sustainable Freight Action Plan being released Tuesday in draft form with a two-month comment period. The plan calls for the launch of more than 100,000 zero- and near-zero emissions trucks and other freight-moving equipment throughout the state by 2030. A day later, the state awarded $23.6 million to the South Coast Air Quality Management District (SCAQMD) for a zero-emission drayage truck development and demonstration project. It will bring 43 battery electric and plug-in hybrid drayage trucks to major California ports. The South Coast air district is teaming up with air districts in the Bay Area, Sacramento, San Diego and San Joaquin Valley to roll out demonstration trucks and charging infrastructure for emission reduction benefits in key areas of California with drayage truck activity. California Air Resources Board Vice Chair Sandy Berg and L.A. City Councilman and SCAQMD Board Member Joe Buscaino led a presentation of the award Wednesday afternoon in the ACT Expo hall.

On Tuesday morning, event organizer Gladstein Neandross & Associates (GNA) released “Game Changer,” a technical white paper – written on behalf of multiple private and public sector organizations – that explores the need and approaches to start deploying zero-emission and near-zero-emission heavy-duty vehicle technologies on a wide-scale basis in the U.S. The white paper has compared four fuel-technology combinations to address these goals and has concluded that there is only one pathway that meets the commercial feasibility and logistics tests to immediately begin this transformation. This is near-zero-emission heavy-duty natural gas vehicles fueled by increasing volumes of ultra-low-GHG renewable natural gas (RNG). This topic was also part of a speaker panel that morning at ACT Expo featuring SoCalGas president and CEO Dennis Arriola. Read more about the white paper.

Jedediah Greenfield, public information and sustainability officer for the City of Houston, chaired a panel on automakers and electric vehicles being used in fleets. Jamie Hall, manager of public policy at General Motors, said that the upcoming Chevrolet Bolt is gaining interest from fleets and consumers for its 200-plus charging range and the various applications it offers as a crossover utility vehicle. Hall said that battery degradation continues to be an area of concern for EV acquisitions; and that none of the Chevrolet Volt batteries have needed to be replaced. Robert Langford, manager, plug-in electric vehicle sales for American Honda Motor Co., thinks that public charging is a driver of EV adoption that needs more support. Smart locations, available charging, and continued growth in DC fast chargers are needed, he said. Langford also talked about two plug-in versions of the Honda Clarity rolling out, joining the Clarity Fuel Cell. Marc Deutsch, EV business development manager for Nissan North America, said that Nissan is selling a lot of certified pre-owned and used Leafs. Pre-owned Leafs are bringing opportunities to disadvantaged communities. Challenges continue for bringing Leafs and other EVs to multiple-dwelling units along with the needed chargers, Deutsch said.

Keynote speaker Andrea Pratt, green fleet and fuel program manager at City of Seattle, explained the total cost of ownership (TCO) model the city has been using in vehicle acquisitions and reporting. Switching over from internal combustion engine vehicles to battery electric vehicles such as the Nissan Leaf has brought big savings to the city – over $2.2 million in operating cost savings by bringing in 150 EVs, she said. It’s been part of the Drive Clean Seattle program transitioning away from fossil fuels in transit and the city fleet, Pratt said.

Emily Castor, director of transportation policy at Lyft, spoke on the “Autonomous and Connected Urban Mobility: Tackling Challenges & Opportunities” panel. Castor talked about how its ridesharing now makes up 40% of the rides in 15 U.S. cities testing out the Lyft Lanes ridesharing service. Castor also talked about a short-term lease program Lyft is trying out with General Motors offering Lyft drivers an opportunity to rent a Chevrolet Volt for rides. Sustainability has been built into Lyft’s strategy of providing mobility services in cities, Castor said.

Workhorse Group received a good deal of attention during the week. Steve Burns, CEO of the company gave a presentation on Workhorse Group’s medium-duty, battery-electric trucks and fully integrated unmanned aerial delivery drones. At its booth, the company showed a video at its display featuring a small drone launching from the top of a delivery truck, flying a package to a nearby house and returning to the vehicle. There was also a display vehicle in the hall featuring a UPS electric vehicle provided by Workhorse Group. Last year, UPS announced the deployment of 18 electric, zero emission delivery vehicles to the Houston-Galveston area in Texas; and 125 hybrid electric delivery trucks rolling into the fleet in Arizona, Texas, Nevada, Mississippi, Alabama, Georgia, and Florida during the first half of 2016. These electric and hybrid delivery vehicles are being produced by Workhorse Group in collaboration with UPS.

During a keynote address, Carlton Rose, president of global fleet maintenance and engineering for UPS, discussed the company’s 6,800 clean vehicles running on CNG, LNG, propane, electric and hydraulic hybrid combinations, and all-electric. Rose called on his colleagues in the audience, especially truck operators and government agencies, to collaborate on investing in the clean technology and fuel, and adopting forward-thinking polices and incentives.

Shipper Award: Unilever
Awardee: Fabio Baldassari, Logistics Strategic Sourcing Manager – Americas
Unilever’s commitment to sustainability throughout their supply chain has grown into CNG for transporting their products to market.
The first pilot project with GAIN Clean Fuel took place in Edwardsville, IL, where carriers for Unilever consume over 1 Million gallons of CNG/year moving goods to market.
The company has additionally reduced energy consumption in its factories by 20%.

Carrier Award: Central Freight Lines
Awardee: Donald Orr, President
Central Freight Lines has been a leader in promoting the use of CNG in the State of Texas.
Became one of the first LTL carriers to purchase CNG tractors in 2012.
Don Orr has been a visionary who realized the impact of CNG usage in heavy duty trucks and has “walked the talk” with his clean air initiatives.

Private Fleet Award: Ruan Transportation
Awardee: Steve Larsen, Director of Procurement and Fuel
Ruan Transportation Management Systems maintains a fleet of approximately 100 compressed natural gas (CNG) tractors.
Currently, nearly 50% of their CNG fleet, 42 trucks in total, provides service for the Indiana dairy, Fair Oaks Farms.
This is a particularly unique case as the trucks are fueled by renewable CNG produced at the dairy. The methane is created from animal waste in an onsite anaerobic digester and piped to a station where it is compressed for fueling by the fleet.

Public Fleet Award: City of Seattle
Awardee: Andrea Pratt, Green Fleet & Fuel Program Manager
Andrea is an enthusiastic champion for cleaner fuels and has helped position the City of Seattle as one of the most progressive fleets in the region.
Seattle was one of the first cities to purchase EVs for a fleet application back in 2011.
The City’s motor pool has nearly 80 plug-in electric/electric-hybrid vehicles – the majority of which are dedicated battery electric. She also established a contract with a local biodiesel provider for more favorable rates than what was offered on the state contract.
Seattle is now planning one of the largest EV infrastructure projects ever seen in the US, with over 400 charging stations.

Transit & Mobility Award: SuperShuttle
Awardee: Karen Fish, Director of Franchising (award will be accepted by Bird Dave, President)
SuperShuttle has been an early adopter of various alternative fueled vehicles, including a significant amount of CNG and LPG, in various markets.
Has been deploying AFVs since 2009.
Purchased 130 CNG vans in 2014.
Has 160 propane vans nationwide as of 2014.
The San Francisco operation is 100% CNG.

Work Truck Award: AmeriPride Services
Awardee: Banny Allison, Fleet Services Manager
Banny Alison has lead AmeriPride in their fleet’s commitment to the environment and the communities where they work.
As one of the biggest operators in the textile delivery industry, they are setting the standard for clean operations and continue to make improvements to delivery operations and invest resources to test and help advance new green technologies.
They have invested in a variety of alternatively fueled walk-in vans, including those that operate on electricity, propane, compressed natural gas and hybrid drivetrains.
The company also invests in efficiency technologies including trailer skirting and doubledecker semi-trailers, fuel efficient sedans for the service team, and the installation of telematics technology and route optimization software to reduce mileage and increase efficiency.

“In it For the Long Haul” Award: UPS
Awardee: Mike Britt, Director of Maintenance & Engineering International Operations Ground
Fleet (award was accepted by Carlton Rose, President, Global Fleet Maintenance & Engineering)
UPS has always been an early adopter of innovative technologies. In the early 1930s, they introduced electric vehicles into our fleet.
Today, they operate one of the industry’s largest private alternative fuel and advanced technology fleets made up of more than 5,000 low-emissions vehicles.
UPS tests and deploys a variety of vehicle types, matched to the terrain and delivery conditions at each location. This approach helps UPS continuously integrate new technologies and operational efficiencies in its large, global delivery fleet.
UPS has demonstrated their commitment to the NGV market through their continued acquisition of both heavy and medium duty CNG vehicles.
They have additionally deployed electric and ethanol vehicles in vehicles that complete short city trips, propane vehicles in rural areas, and LNG in long-haul applications.
Since 2000, their alternative fuel and advanced technology vehicles have logged more than 500 million miles in the U.S., Germany, Canada, Netherlands, Chile, Thailand, Hong Kong, South Korea, Brazil and the United Kingdom.

NGVAmerica President Matthew Godlewski honored two recipients with the 2016 NGV Achievement Awards, FCA US LLC and Anheuser-Busch, during the Fleet Awards dinner. FCA, the first to market a factory-built pickup truck powered by compressed natural gas (CNG), the bi-fuel Ram 2500, recently committed approximately $40 million to FCA Transport, an FCA US-owned truck fleet, to convert 179 diesel-fueled parts-haulers to run on clean-burning natural gas at its Detroit Terminal. Annually, this new fleet will displace nearly 3.3 million gallons of diesel fuel and dramatically reduce CO2 emissions. Through its “Seed-To-Sip” sustainability initiative, Anheuser-Busch is committed to reducing the energy and emissions in both the brewing and transportation of their beers. In 2015, its flagship brewery in St. Louis replaced all 97 diesel-fueled tractors with new CNG-powered trucks, following the deployment of 66 CNG trucks in Houston the prior year.