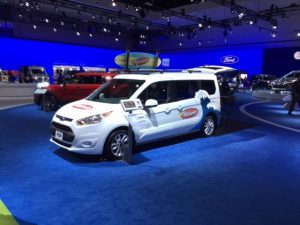 The Honda Clarity Fuel Cell, Chevrolet Volt, and Toyota Mirai were the leading green cars at this year’s LA Auto Show in gaining media attention. The Volt took its second “best” award since its initial launch in late 2010. Other auto show highlights included launching of the ROEV Association electric vehicle group, a first look at the production version of the Elio Motors 3-wheeler, and the Volvo Concept 26 self-driving car (and the Wahoo’s Fish Taco van pictured to the left.)

The completely redesigned 2016 Chevrolet Volt has been named Green Car of the Year, repeating a victory it claimed when the original plug-in hybrid debuted five years ago. The revamped 2016 Volt has been built on a new, lighter chassis, utilizing a smaller but more powerful battery pack that allows it to now squeeze in five passengers, and increases range to 53 miles per charge. The four 2016 model year finalists were: Toyota Prius which has a new body style and a fuel economy increase of about 10%; Honda Civic, which was also redesigned for 2016; Hyundai Sonata with its high-mileage gasoline engine as well as both a plug-in and a standard hybrid option; and Audi A3 Sportback e-tron, the automaker’s first U.S. plug-in hybrid model.

The Volt was available for the ride and drive, along with the Toyota Mirai fuel cell car. Those visiting the Toyota exhibit inside the hall could look under the Mirai’s hood; they could also watch a video playing tribute to the anniversary of the “Back to the Future” movie trilogy. Toyota participated in the 30th anniversary of the first film in the series with a commemorative video with the film’s stars, Michael J. Fox and Christopher Lloyd. It also served as a kickoff for the U.S. debut of the 2016 Toyota Mirai hydrogen fuel-cell vehicle. Toyota says that about 2,000 people have already placed orders for a Mirai, which is now on sale in select California markets. Toyota anticipates that it will fulfill about half of those orders for the 2016 model year.

The Ford Transit Connect urban delivery van was prominent in the Ford Motor Co. exhibit space. As seen in the photo, one of the vans shown in the Ford display was a fleet vehicle used by Wahoo’s Fish Taco for catering. The most visible vehicle at the Ford exhibit was the refreshed 2017 Ford Escape that will go on sale next summer. Ford will put about 275,000 of these new vehicles on the road with start-stop technology, making it Ford’s biggest push into the fuel-saving technology to date.

On Thursday morning at the LA Auto Show, five partner companies announced the creation of the ROEV Association (which stands for Roaming for Electric Vehicle charging), a collaboration of industry stakeholders designed to support electric vehicle adoption by facilitating public charging network interoperability. BMW of North America, Nissan, and three EV charging networks – CarCharging/Blink, ChargePoint, and NRG EVgo – are working together on ROEV. The association says that its participants operate about 91% of the charging stations open to the U.S. public, with a total of 17,500 stations. One of ROEV’s primary goals is to provide easier access to all networked, public EV chargers by adopting and promoting interoperability standards. “The ROEV Association is working to streamline EV charging access across multiple charging networks in order to help bring EVs further into the mainstream,” said Simon Lonsdale, Chair of the Board of ROEV. (To learn more, visit www.roev.org.)

Those attending LA Auto Show were able to view the debut of the production version of 3-wheel gasoline-engine car from Elio Motors. The car is small and light enough to get 84 mpg and will cost $6,800. The company plans to launch production at an old General Motors plant in Shreveport, La., by the fourth quarter of 2016. Elio Motors is still looking for more financial backers to get the car ramped up for production and out for sale.

The Volvo Concept 26 is still years out, but gained attention during the auto show. It will be equipped with features such as a tablet computer built into the center console, a fold-away tray table, and a 25-inch color monitor that pops out of the passenger-side dashboard. The Concept 26 shares the same new Scalable Product Architecture used for most of Volvo’s future products, including its new XC90 SUV. Volvo says that the concept car had “26” added to its name as a reference to the fact that drivers average 26 minutes a day stuck in traffic-snarled cities like Los Angeles, which adds up to 100s of hours each year.