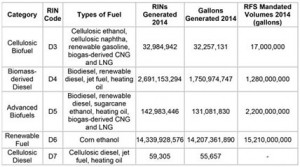 As you review this table with 2014 Renewable Identification Number (RIN) production data, you’ll notice a diversity of biofuels starting to enter the market. The US Environmental Protection Agency released this data last month to track whether production goals set in the Renewable Fuel Standard were met. It’s no longer all about ethanol, with biodiesel seeing growth and cellulosic starting a new phase.

Cellulosic biofuel (such as cellulosic ethanol) nearly doubled that number with over 32 million gallons generated and biomass-derived diesel (such as biodiesel) surpassed the mandate by nearly 471 million gallons. Advanced biofuels (biodiesel and renewable diesel) were behind the mark. Corn ethanol fell behind by about a billion gallons, but it’s the biofuel category making up the lion’s share of the total reaching over 14.2 billion gallons in production last year. Without being lifted to the E15 level (15% of gasoline instead of the current E10 level) by the EPA, its volume has been lower than the original benchmark set in the mandate.

RIN volumes and prices are followed closely by biofuel producers and oil companies. Under the Renewable Fuel Standard, oil companies can either buy a gallon of renewable fuel to comply with the RFS or buy a RIN credit on the open market. It’s been one of the targets of complaints by oil companies and oil refineries.

Ethanol is used as the baseline for calculating RINs, with one RIN equaling one gallon of ethanol. Biodiesel accounts for 1.5 RINs per gallon, and other categories have their own RIN ratios. RINs are given monetary value on the market as an incentive for renewable fuel production and the EPA uses RINs to monitor biofuel trading and production volumes.

Lux Research, which featured that table above in a report issued on Sunday, made the point that cellulosic biofuel has entered a new phase. For the first time since adoption of that category in 2010, the mandated volume was met by the commercialization of cellulosic ethanol. However, Lux Research warns investors and analysts to not overrate the performance of that segment. RIN data from December 2014 showed that only 89,327 gallons of cellulosic ethanol were generated; that signifies a much slower ramp up of the POET-DSM’s Abengoa facility that received much attention and acclaim when in started up operations in September. The biofuel industry has seen its share of commercial facilities open up and miss their targets with low production volumes.