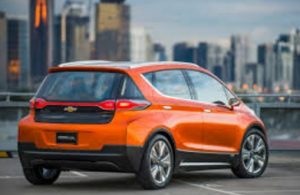 Plug-in sales trends and new car launches:  Plug-in hybrid was the top-selling category over all-electric vehicles in 2016, which switched over a sales trend that had been led by the Tesla Model S and Model X, and Nissan Leaf, in all-electric vehicle sales. The revamped 2016 Chevy Volt has been the top seller in the U.S. and the Ford Fusion Energi nearly doubled its sales in November over the previous year. The Mitsubishi Outlander PHEV has been leading the electric vehicle market this year in Europe, beating the Renault Zoe and Nissan Leaf.

The all-electric Chevy Bolt has been taking center stage lately as it rolls out to dealers in California and Oregon, and the rest of the country next year. The 238-mile per charge EPA rating, and $37,496 pre-incentive price have driven the enthusiasm and interest. Earlier this year, Tesla Motors unveiled its 200-mile plus, $35,000 Model 3 in the spring, and started taking $1,000 down payment pre-orders; over 400,000 consumers opted in by summer time. The Bolt vs. Model 3 race has become more significant and news worthy than the Nissan Leaf vs. Chevy Volt launches in late 2010. Both General Motors, and especially Tesla, are gearing up for production levels beyond what’s ever been seen in plug-in sales. The Model 3 forecast is much bigger than that of the Bolt with 100,000 units planned for 2017 and 400,000 units in 2018; but there’s always the possibility that GM will scale that up to stay competitive.

The Chrysler Pacifica Hybrid (plug-in hybrid) was significant for the being the first electric minivan, and for being the first time Fiat Chrysler Automobiles has taken a plug-in vehicle all that seriously. The Fiat 500e has been a “compliance car” to meet California’s ambitious and strict zero emissions vehicle targets, with only a small volume produced and sold in the state. FCA has been showcasing the Pacifica Hybrid at the LA Auto Show and other events, while the gasoline-engine Pacifica been highly visible in billboard ads and online campaigns. FCA’s decision to launch the plug-in hybrid version along with the gasoline-engine version shows that automakers see utility vehicles (especially crossover SUVs) being very important for increasing plug-in sales.

The Honda Clarity Fuel Cell represented a step forward for hydrogen fuel cell vehicles, and for a standalone green car product line. Like the Prius being offered in four technologies (including the refreshed Prius Prime plug-in hybrid), the Clarity will later come out in all-electric and plug-in hybrid versions. Honda sees the Clarity as its brand offering three electric variants, with the first one, the Clarity Fuel Cell, having the best mileage in its class. The Clarity Fuel Cell has 366 miles of range in the EPA rating, which beats the Toyota Mirai and Hyundai Tucson Fuel Cell. This car faces the challenges of all fuel-cell vehicles: limited fueling stations beyond California, and making the big leap to get car buyers to take the new technology seriously. Electric vehicles are making strides forward beyond early adopters, but that’s taken nearly six years through what is now a wide range of product offerings, charging infrastructure improvements and expansion, competitive pricing, and hands-on experience with the technology.

The unexpected victory of the Trump campaign will take a while to be sorted out for advocates of clean transportation and energy. Trump’s nomination of Scott Pruitt to the Environmental Protection Agency was the first blow, along with the impression gained that the 54.5 mpg by 2025 phase two period for 2022-25 vehicles would be postponed and softened. Pruitt and other agency appointments have been distressing for environmental and cleantech groups. The latest news has included acting EPA Assistant Administrator Janet McCabe telling the Alliance of Automobile Manufacturers in a letter that the agency won’t be extending the deadline for a review of the fuel economy and emissions standards. National Highway Traffic Safety Administration has gone in the other direction – that enforcement agency is postponing the enforcement of the rules starting with 2015 model year vehicles to the 2019 model year; and NHTSA will allow for more input from automakers in the rule-making process on clarifying discrepancies between the greenhouse gas emissions standards regulated by the EPA and the fuel-economy standards enforced by NHTSA. Automotive executives, including Tesla CEO Elon Musk, are taking a business-first approach to dealing with the Trump administration. Musk, along with GM CEO Mary Barra and Uber CEO Travis Kalanick, accepted Trump’s invitation to participate in a Strategic and Policy Forum that frequently will advise him on economic issues and jobs growth.

Some cleantech and clean energy analysts expect to see growth in solar and wind power, vehicle electrification, alternative fuels, battery energy storage, and energy efficiency, during the Trump years. There’s been substantial growth in these technologies in recent years, along with more acceptance and interest from end users; government incentives and policies may not be as important as they were during the Obama administration. There’s also stringent mandates, and generous incentive programs, still in place in Europe and Asia, that will support growth in vehicle electrification and renewable energy.

The Volkswagen court settlement on October 25 has gained a great deal of interest in the clean transportation community. To address the excessive NOx emissions from Volkswagen’s diesel cars, $2.7 billion has been allocated to fund the Environmental Mitigation Trust (EMT). The portion of the settlement to reduce NOx exposure and air pollution allows for each state to allocate EMT funds within court settlement guidelines; it’s based on the number of VW diesel vehicles sold and registered in those states and will be spent by VW over a 10-year period. Of that total, $2 billion will go to supporting zero emission vehicles. Of that $2 billion, VW will invest $800 million in California and $1.2 billion throughout the rest of the nation. The EPA says that ZEV funding from VW is to be spent on things such as Level 2 charging at multi-unit dwellings, workplaces, and public sites; DC fast charging facilities accessible to all vehicles utilizing non-proprietary connectors; and brand-neutral education or public outreach that builds or increases public awareness of ZEVs. The $700 million remainder from the EMT funding could also provide opportunities for suppliers of other alternative fuels and infrastructures including natural gas, propane autogas, biofuels, renewable natural gas, and renewable diesel.

Five global automakers have committed to rolling out rolling out millions of new plug-in electrified vehicles in the next few years – and that list doesn’t include Tesla Motors. Volkswagen, Daimler, BMW, Hyundai, and Toyota have made serious commitments this year to design, develop, and launch over 40 new models by 2025 and manufacture several million per year. That’s being driven by Tesla quickly gaining over 400,000 down payments on the upcoming Model 3. Another market pressure comes from the “Dieselgate” scandal, prompting governments in the U.S., Europe (primarily Germany), and Asia to tighten emissions rules and enforcement.

Volkswagen was the first to make an announcement – that it would be introducing 30 new all-electric vehicle models by 2025, and would produce two-to-three million EVs per year by that time. Both Daimler and BMW announced a few months later that their global sales will include 15-to-25 percent all-electric and plug-in hybrid vehicles across their brands within 10 years. Combined, that would be about three quarters of a million up to one million new PEVs sold per year starting in about 10 years. Daimler previewed its new EQ electric car brand through the Generation EQ concept at the Paris Motor Show. For Hyundai, the all-electric Ioniq was scheduled for launch by the end of this year, with plug-in hybrid and hybrid versions to follow. The Korean automaker said it will roll out a new electric car model every two years to keep pace with how quickly electrified technology is emerging in the market. As for Toyota, in late November Toyota President Akio Toyoda said that he’ll be heading the company’s newly formed electric car group. Toyota had backed away from its previous alliance with Tesla and became committed to hydrogen fuel cell vehicles. More recently, the company has committed to hybrids, fuel cell vehicles, and PEVs to meet global regulations and to remain competitive in the global market. Toyota has been seeing breakthroughs in its battery technology, which seemed to help the Japanese automaker commit to rolling out new PEV models.