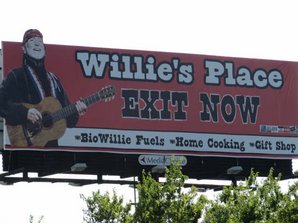 Biodiesel has provided inspiration for many, including the legendary singer/songwriter Willie Nelson. It’s also been enough to motivate his music industry colleague, Neil Young, to roll out the Lincvolt, a biodiesel-powered hybrid. There was also Josh Tickell touring the country in the mid-2000s in his Veggie Van, powered by biodiesel made from cooking oil taken from restaurants. For some, biodiesel has a do-it-yourself appeal; these are people living outside the mainstream and wanting to live outside the power of the oil industry.

But it’s also an industry, one suffering through several blows and challenges. Biodiesel has shot up in production volume, with the federal mandate bringing it from 500 million gallons in 2009 to 1.28 billion last year. Biodiesel producers saw conditions changing in recent years with a federal tax credit expiring, and the US Environmental Protection Agency deciding to scale down the production volume. Nelson’s story is a telling one highlighting the difficulties in succeeding in a new and risky business like biodiesel.

By 2007, Willie Nelson became committed to biodiesel in a book he’d written and through releasing his BioWillie biodiesel product. Having been an organizer of farm aid fundraising concerts since the 1980s, Nelson saw biodiesel as a logical continuation. BioWillie would help “reduce our dependency on foreign oil while simultaneously saving the American family farm,” he said.

Nelson had joined the board of Earth Biofuels, a Dallas company that left a trail of unpaid debts, delayed securities filings, and disgruntled investors. He forfeited six million shares of stock to resign in 2007. In 2008, Nelson and his business partners transformed a landmark truck stop on Interstate 35 in Texas into Willie’s Place, a biodiesel theme park. People stopped for the fuel and to view Nelson’s display that included gold records and occasionally a chance to meet the legend himself.

To come up with funding, Nelson and his partners took out a $4.75 million loan to finance construction of Willie’s Place. The group defaulted on the loan and Nelson put up $35,000 of his own money to make a payment. Willie’s Place was sold in 2011 during foreclosure proceedings.

Nelson, at 81 years old, has not given up on biodiesel. He has an ownership stake in Big Island Biodiesel of Hawaii and SeQuential-Pacific Biodiesel of Salem, Ore. Nelson also controls the trademark for BioWillie, sold at pump stations on the islands of Maui and Hawaii.