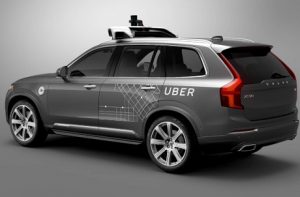 Uber has been testing its autonomous, shared rides for the past month in California, and it may be blocked by the state government from continuing these trips. The California Department of Motor Vehicles on Wednesday sent the ride-hailing company a cease-and-desist letter demanding it must stop its self-driving car tests in the state.

That hasn’t stopped Uber so far. On Friday, the company said it will continue the tests despite the DMV’s statement. The California Attorney General has threatened an injunction if Uber does not comply. Uber said that its semi-autonomous car system isn’t different from what owners of Tesla vehicles can do with the Autopilot driver assistance systems and that other automakers’ cars offer with parking and collision avoidance.

Launched in Pittsburgh this past September, Uber’s pilot program has been testing about 100 self-driving Volvo XC90s plug-in hybrid SUVs and Ford Focus hybrid sedans, each one with an engineer riding along to monitor it and take control if necessary. Customers are allowed to decline rides in the self-driving cars if they choose and wait for a regular Uber ride. In San Francisco, the company is using 11 sensor-packed Volvo XC90s. Some are meant to pick up customers, and others will be used to log mapping and sensor research miles.

In both Pittsburgh and San Francisco, the cars are not capable of being driven without active physical control and monitoring, according to Uber. The company said it has asked the DMV what is different about its technology compared with Tesla’s, which have an Autopilot partially self-driving feature. Uber said that it hadn’t yet received an answer.

As least 20 other companies have applied for and received the DMV permits to test on California roads, including Google, Tesla, Ford and Nvidia.

Google names project Waymo, may back away from fully autonomous
Google’s Self-Driving Car Project was renamed “Waymo” last week. While the company had previously been an advocate of fully autonomous vehicles without steering wheels or pedals, it may be backing away from that stance. A technology news media website, The Information, reported that the growing competitive climate with several companies entering the space has caused Google co-founder Larry Page to rethink his company’s mission.

Waymo will be an independent unit within the parent company. Alphabet executives said the company is close to bringing its autonomous driving to the public and will reveal more later.

While autonomous vehicles used to be nothing more than a testing project for several automakers and tech companies, lately it’s become a much more viable sector for commercializing a new technology. Page is concerned that Alphabet and Google could be left behind. Google may be in a better position to provide technology to automakers rather than go through the capital-intensive, lengthy, and complex regulatory process of building and selling its own autonomous cars.

It may have been behind Chris Urmson leaving Google this year. Urmson, a longtime champion of fully autonomous vehicles as he headed Google’s self-driving car project for years, left in August. The New York Times had reported that Urmson wasn’t happy with the leadership of John Krafcik, formerly the head of Hyundai America, who was hired in 2015 to be chief of the project. The Times report also said that Urmson had argued with Google co-founder Larry Page over where the division was headed. Urmson may be starting his own autonomous car software firm, according to media reports.

FCA delivers self-driving minivans to Google, discussing ridesharing service
Fiat Chrysler Automobiles announced yesterday that it has completed building 100 minivans that are being outfitted with autonomous vehicle equipment for the new Waymo subsidiary. The Chrysler Pacifica Hybrids recently were completed at the automaker’s Windsor Assembly Plant.

The ridesharing service will be tied into the 100 Pacificas that the two companies agreed in May to develop together – and that FCA has completed. They’ll be using the plug-in hybrid version of the Pacifica minivan during the self-driving testing process.

FCA has been enthusiastically marketing the new plug-in hybrid version, which it calls the Pacifica Hybrid. The automaker will reveal an all-electric version of the Pacifica during the CES electronics show in Las Vegas next month, sources said. FCA has been looking for ways to roll out more zero emission vehicles as the global regulatory front tightens up on emissions.

Other automakers, including Volkswagen, BMW, Ford, Toyota, and General Motors, have made serious investments with partners this year to stride forward in ride-hailing, ridesharing, and carsharing mobility services.

Tesla wants to control how its cars are used for ridesharing
Tesla Motors may not like to see the presence of a startup firm that has taken the name “Tesloop,” which is offering Tesla vehicles for share rides to its customers. In October, Tesla said that it wants to launch its own shared ride service and doesn’t want to see its electric cars used outside that network.

Tesloop, based in Los Angeles, offers city-to-city shared vehicle trips. The startup seems to be structured more like longtime transportation companies than ride-hailing firms Uber and Lyft. The Tesla vehicles used in the Tesloop fleet have a California TCP number on the rear bumper, which means the company is certified as a commercial passenger carrier in the state. The company has to follow commercial vehicle insurance and driver guidelines that other transportation service providers have to follow; including more extensive driver background checks than Uber and Lyft so far have to comply with.

In October, Tesla announced that it will not allow any of its electric vehicles to be used by owners to drive for ride-hailing companies such as Uber or Lyft. While sharing rides with family and friends is fine, the company said it doesn’t want to see its self-driving vehicles used for revenue purposes outside of its own Tesla Network, which will be launched later on.

“Please note that using a self-driving Tesla for car sharing and ride hailing for friends and family is fine, but doing so for revenue purposes will only be permissible on the Tesla Network, details of which will be released next year,” the company said.

Tesloop works with drivers now, which it calls “certified Tesloop Pilots,” but the firm is enthusiastic about tapping its autonomous systems as soon as possible. “As autonomous car technology improves over the next three years to the point where it is safer than human drivers, we expect this to become a common reality,” the company said on its website.

As for now, trips in a Tesla Model X and Model S are driven by a “certified Tesloop Pilot” and carry passengers to points throughout Southern California and out to Las Vegas. As a marketing message, the company sells $39 trips between cities.

The company will be spreading its network in the San Francisco, San Diego, and Santa Barbara areas. Vacation spots like Palm Springs are emphasized. The company uses Tesla’s Supercharger network of fast-charging ports.

By 2030, the report expects to see “new energy vehicles” (plug-in hybrid and all-electric vehicles) make up 40 percent of the 38 million new vehicles that will be sold in China during 2030, or about 15 million units.

Things are already in the work in China – and in the U.S., in what may also end up in China. Chinese company Baidu is teaming up with Nvidia to use artificial intelligence to building a platform for self-driving cars. LeEco, NextEV, and Lucid Motors are tapping into cutting-edge autonomous technology and talent directly from California. That may end up in vehicles sold the in the Chinese market, too.

China’s policies also include some ambitious emissions reduction targets through these measures. It also encourages foreign countries to share their best electrified and autonomous vehicle technologies with Chinese partners – or be blocked from having access to the market.

General Motors has found out recently how serious the Chinese government takes guidelines such as these. The automaker, which plays a large role in China’s auto market through its partnership with Chinese companies, is under investigation by the Chinese government for potential anti-trust violations. Forbes thinks that the risk of serious damage is low, and that China uses such tactics to keep foreign companies a little bit off balance and to follow China’s lead.