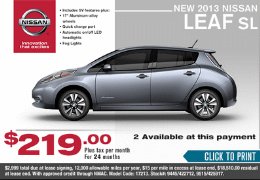 Tesla Motors has been getting a lot of attention in the auto industry lately as it attempts to bypass state franchise laws and sell directly to consumers. With Tesla going outside the traditional dealer system, the company has come up with its own creative leasing program – what it calls a guaranteed “buy back” program where Tesla offers to buy back the electric sports car between 36 and 39 months. Leasing, whether through buyback or traditional leasing, has played a dominant role in sales of the Tesla Model S, Nissan Leaf, Chevrolet Volt, and other EVs.

Scot Hall, Executive Vice President at Swapalease.com, has been closely watching what’s going on with Tesla’s leases – and other EV leases through OEM captive finance arms. Swapalease.com helps its customers exit their vehicle leases early by marketing their car lease to lease buyers seeking a short term lease assumption or lease transfer; it’s the world’s largest automotive lease marketplace and monitors every type of lease out in the marketplace.

Hall thinks that leasing makes quite a lot of sense for consumers interested in trying out the new technology in EVs. “It’s a little but unknown,” Hall said. “Leasing resolves it.”

Tesla’s guaranteed residual value on the Model S has been based on the Mercedes Benz S Class as the benchmark – Tesla promises the Model S won’t depreciate any lower than the S Class; and Tesla will buy back the car at the agreed price. It’s not a lease as the car owner has to finance and pay taxes on the full vehicle. The $7,500 federal tax credit is only available when you lease an electric vehicle through a local dealership. Tesla has a direct sales model and does not sell through dealers, essentially preventing them from offering a standard lease program.

Beyond the Tesla Model S, EV leases through other automakers have been standard and very similar to any other lease transaction, Hall said; they’re usually carried by OEM captive finance arms. The Model S has been outside the Swapalease program, though there were a few Tesla Roadsters in Swapalease. Hall said that for Nissan Leaf lessees participating in Swapalease, they have found the payment offering attractive, and overall, it’s been a satisfying experience for them.

Some automotive analysts wonder what residual values will look like for EVs coming off-lease. While there’s been concern over their market values expressed by Kelley Blue Book and NADA Used Car Guide, Hall doesn’t it expect it to be a significant problem. He hasn’t seen dramatic changes yet in plug-in EVs or hybrids coming off-lease, and consumers are shielded from residuals when they go off-lease. Used car prices are expected to go down this year, and EVs could potentially see an even greater challenge than other vehicle categories, he said. It is a bit early in the used car market off-lease cycle to know for sure.

Some of the EV leases may have been structured with overly optimistic price valuations to make the EVs more price competitive; but captive finance arms are being more realistic than they were 10-to-15 years ago on residual values overall, Hall said. Used EVs can also present OEMs and dealers with an opportunity for certified pre-owned vehicle programs as well, he said.

While some of the lease prices are up there (especially for the Model S), ownership cost isn’t necessarily a deal breaker for consumers interested in EVs, Hall said. Some of them have environmental concerns and don’t just look at competitive pricing on the market. EVs can be more profitable for OEMs long term.

Swapalease’s staff have had access to two Chevy Volts, and they’ve enjoyed the experience. They are looking forward to the next generation Volt coming out, which should double the battery driving range, Hall said.