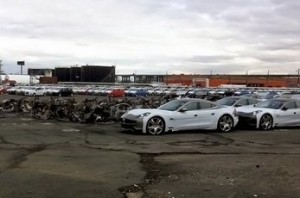 A little over a year ago – Oct. 29, 2012 – Hurricane Sandy struck New Jersey and the New York City metropolitan area in what became the most significant weather disaster since Hurricane Katrina hit New Orleans in 2005. Debate flared up about what caused this devastating event and its aftermath – 117 deaths; 200,000 homes damaged and a few hospitals; eight million residents affected by power outages; transportation being stopped; and $68 billion in costs. A lot of cars were destroyed at Port Newark, New Jersey, and it was one of the events that pushed Fisker Automotive far to the edge of staying in existence.

New York City Mayor Michael Bloomberg knew it was caused by climate change; New Jersey Gov. Chris Christie doesn’t think climate change had anything to do with it. Stakeholders in the automotive and transportation sectors have been discussing the impact of the storm and what needs to be done to prepare for future emergencies.

Here’s the latest analysis on the impact of Hurricane Sandy……