Renewable energy and fuels are seeing broader support globally for decarbonization, much of it through integration of sources that were not typical years ago. A clear example this year is “green hydrogen,” where emissions can be eliminated by using renewable energy to power the electrolysis of water.

Here’s a look at what aspects of renewables are gaining the most traction………….

Green hydrogen:  Support for hydrogen has been taking a wider base recently with concern over the cost of extracting hydrogen — and where it comes from — improving substantially. Most of it had been coming from natural gas, but that’s starting t 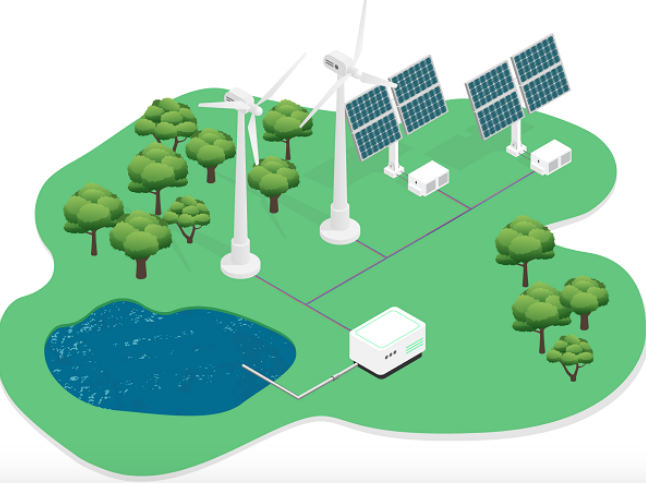 o change. For natural gas, much of the hydrogen has come from steam methane reforming (SMR), which causes the methane found in natural gas to react with steam, which then produces hydrogen and carbon monoxide. One method to clean it up has been called blue hydrogen, where the emissions are curtailed using carbon capture and storage.

Green hydrogen is even cleaner as it can almost completely eliminate emissions by using renewable energy for powering electrolysis of water that’s needed in producing hydrogen. It’s still costly, with electrolyzers still in short supply, and tapping into plentiful sources of renewable energy still coming in at a high price. Hydrogen supporters see this cost coming down as demand for the fuel grows in generating electricity, power, and heat.

A proposed plant in Lancaster, Calif., just north of Los Angeles, could produce the greenest hydrogen on the market. It will use plastics and recycled paper as a feedstock — waste that would otherwise go to a landfill. It will be gasified at temperature high enough to be transformed into hydrogen. If adopted, it would be run by SGH2 Energy Global, which is part of the Solena Group. The company says that its technology reduces carbon emissions two-to-three times more than green-hydrogen produced using electrolysis and renewable energy — and its technology is five-to-seven times cheaper, the company said.

But wind and solar will still see high growth rates, with costs continuing to drop. Energy consulting firm Wood Mackenzie expects that solar PV system costs in the US are falling faster than previously forecasted. Sarah Golden, senior energy analyst at GreenBiz Group, says that the cost of producing energy from wind has fallen by as much as 70 percent since 2009. International Renewable Energy Agency recently reported that wind, along with solar, beat the cheapest coal in cost for power generation.

Waste-to-energy, and Waste-to-fuel:  This has been getting a lot of support in recent years from major disposal companies like Waste Management, Inc. This year, an unexpected growth segment has come up through COVID-19. New priorities have been tied to sustainable disposal of medical waste, and dealing with growth in unrecyclable plastics, and an increase in the use of face masks and other personal protective gear.

Another bright spot has been researchers finding that next-generation thermochemical processes convert solid waste – including plastics, medical waste, municipal solid waste, and wastewater sludge – into hydrogen without incinerating the waste. Carbon dioxide produced during the process can be efficiently captured and stored to make new products using technology that is commercially available today. The costs that are continuing to fall, making it even more viable.

Renewable fuels:  Biogas is becoming even more practical and clean as landfill gas (LFG) grows in usage. The digestion process takes place in the ground rather than in an anaerobic digester commonly used to produce renewable fuels. As of June 2020, there were about 564 operational LFG projects in the US, according to the US Environmental Protection Agency. As for now, most of these projects use biogas to produce electricity rather than to power natural gas vehicles.

Making renewable natural gas (RNG) for natural gas vehicles requires a higher content of methane than biogas. It also requires the removal of water, carbon dioxide, hydrogen sulfide, and other trace elements to produce RNG. But RNG continues to gain support among fleet managers and stakeholders in NGVs. A recent commentary by S&P Global Platts made the point that while hydrogen has been grabbing headlines through large-scale national plans being scheduled, RNG deserves more attention as “an emerging tool for decarbonization.”

One advantage explained in the commentary is that RNG can be appealing to US energy companies looking to diversify. An example would be Southern California Gas Company (SoCal) releasing an agreement between SoCal, the San Diego Gas & Electric Co., consumer advocate groups, various industry groups, such as RNG Coalition, and the Environmental Defense Fund (EDF). It came about with the goal of facilitating increased volumes of RNG to California customers.

And in other news……..
Fisker finds needed capital:  Fisker Inc. reached a deal to go public last Monday by merging with a special purpose acquisition company (SPAC) backed by Apollo Global Management. Founder Henrik Fisker was able to raise more than $1 billion to help bring the Fisker Ocean electric SUV to market by late 2022. Proceeds from the transaction were valued at $2.9 billion. The business model is different than Tesla and other automakers, and was compared to the role Apple has played — cool technology, but production has been farmed out to others, cutting down the huge capital outlay needed to become a carmaker. Fisker is in talks with Volkswagen to use its modular EV platform and to assemble its vehicles at a VW plant in Europe. Its retail store model will be closer to Tesla’s — with customers able to place customized orders online and also to visit “brand experience centers” in key US and European markets.